Hell yes, Beto wants my AR-15. He says he’s going to buy it back, although it’s not for sale. Beto is going to spend other people’s money to buy back our guns, and when that fails, he’s going to send other people to get them. And people will die. I don’t think Beto has a chance to get the nomination. He’s desperate, polling at somewhere close to zero. This is a cry for attention, and it will fire up the Democrat base because they want our AR-15’s too. But the leadership has been through this and they know it’s a losing issue for them. The first assault weapons ban caused a red wave in Congress and the rifles are only more popular now. 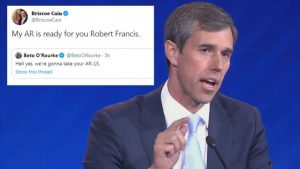 Now, the Democrat leaders want my AR-15 too. They don’t care if they it buy back or kill me to take it. They know an armed man is a citizen and an unarmed man is a subject, and they want subjects. They are a little miffed at Beto, because he’s taking the lead from them on this issue. Beto is promising something the base wants, but something real Americans don’t want. The left knows they can’t even steal elections promising to disarm us. Beto is letting the cat out of the bag. By saying he wants to take the guns, he’s forcing them to admit that they aren’t willing to do it, which will anger their base, or admit that they want to take them too, which costs them votes. Many votes.
Leftists are liars, first of all. The whole platform is a lie. They substitute things like “pro choice” for “pro abortion” because the truth isn’t pretty. They have to conceal their agenda, because if they were open about it, people wouldn’t vote for them. “Common sense gun control” is another such lie. They call freedom a loophole in the law. They really want all guns gone, they just can’t say that.
Beto is like a the linebacker coming up to the line of scrimmage and yelling “I’m going to blitz right here”. The Democrats needed a stealthy agenda. They needed the President to do the only thing that can stop the Trumpslide in 2020. They needed the GOP to stab us in the back. They needed us to remain complacent. It looked like most of that was in place, and then Beto blew the lid off the whole show.
He’s the male version of AOC. I’m sure when he walks outside, the wind whistles through his ears. But he had so little sense and enough blind ambition to throw caution to wind and bare their agenda, and we owe him for that.