Editor’s Note: This is part 1 of this discussion. In future installments, we will focus on specifics, both regarding the history, current situation and future objectives. In those future articles, we will attempt to flesh out this proposal in detail. 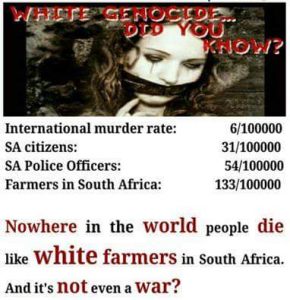 Look closely at the image above. Imagine the horror of living in a society where White Farmers are 2 1/2 times more likely to be murdered than the police, and 4 1/3 times more likely than an average citizen. One estimate puts South African murders at nearly 24,000 per year, between the years of 1990-2009. Another site indicates that murder rates are continually increasing, year after year. While making up approximately 9% of the South African population, nearly 40% of murder victims are white. For more gruesome information on this ongoing genocide, you can visit this site. There, just follow the embedded links, but be warned. There are some pictures that are horrific and unsettling.
So how did this all come about? Why are these White South Africans being slaughtered and abused? Sadly, most Americans are not really aware of how the situation developed, and know little about South African history, beyond some vague notions that Nelson Mandela was sent by God to save all the oppressed Black folk, and helped to end a racist and corrupt White Minority government 20 years ago. The reality is much more complex.
In the 17th century, Dutchman began to colonize the southern tip of Africa. The Dutch East India Company was chartered in 1602, and within a  half century had established an viable outpost in South Africa. This is in the time period of extensive European Colonization, with the Dutch colonization of Africa occurring concurrently with the English settlement of North America (Jamestown in 1607). At that time, the region was sparsely populated by native Africans, and these new settlers set out conquering the land. In short order, they had begun to harness the natural resources of South Africa, and to wrestle a civilization out of the wilderness.
Eventually, the British came to rule the region, but the Boers, as these Dutchmen came to be called, did not easily submit to foreign control. In fact, in the late 19th and early 20th Centuries, they fought the British in two separate wars, defending their sovereignty. While they eventually lost the military conflict, their hardiness and tenacity endured.
Throughout the 20th Century, the Boers, often referred to as Afrikaners, seized political control, as British influence waned. This led to the establishment of the Apartheid government. While condemned by many, that government actually led to a stable society that was bringing growth and prosperity to the people of South Africa. In fact, not only the European-descending citizens enjoyed this improving situation, but the Black Africans did as well. Since there are strong feelings and attitudes regarding the Apartheid period, this will be covered in more detail in a later article, where we will address both the good and the bad elements of that system.

Of course, in 1994, the situation changed. Blacks were able to assume political control, and immediately began to punish the White inhabitants. These punitive policies not only damaged the lives of the Afrikaners, but the whole nation.
What had once been a civilized society, nearing first world status, was reduced to rubble, racked with poverty, violence, and disease.
The vast majority of the Afrikaners have historically worked in the farming industry, and provided food and wealth to their country. Now, they face violent attacks at home, with little hope of any sort of police protection. In the words of an Afrikaner, who now works to survive in his ancestral home:

Many whites are falling through the cracks created by the blatant anti-white discrimination, ending up in squatter camps. …White South Africans [should be] recognized as a refugee status population due to the racist government policies directed against us.

for many, the situation is already pretty dire.

Many men and women of this noble race are being systematically eradicated, either killed outright, or forced to live in squalid conditions. Blacks often march with banners proclaiming such horrific entreaties as “The Honeymoon is over for the Whites” and “Kill them like they killed us.” Genocide Watch (GW) has declared South Africa to be in Stage 6 Genocide. The victims of this threatened genocide, according to GW? Whites, Boers.
Now, normally, we consider Western Culture to be a European construct, and Africa is clearly not part of that equation. In this case, however, we can clearly see that those early Dutch settlers carried their European religion, culture, and society with them and carved out a niche of Western Civilization in a hostile environment. These men were Men of the West in the truest sense. Their descendants have carried that tradition forward, and they still exhibit those characteristics that a Man of the West holds most dear.
With that in mind, I propose a radical solution to the problem of their ongoing persecution. There is no doubt that we Men of the West oppose immigration from regions that are antithetical to western cultural ideals. With this group of Afrikaners, we find a body of men (and women) that embody the very fabric of Western Culture. They are Christian. They are independently minded. They are resourceful and self-sufficient. They are the kind of immigrants that the United States needs, if it hopes to recover the culture that is quickly eroding. They would help counteract the negative impact of immigrants who are  hostile to our culture and way of life.
In 2013, over 40 million residents of the United States were foreign born. In total, there are approximately 2.5 million Afrikaners. Therefore, I call for an immediate invitation to these wonderful people, offering them sanctuary in the United States. We would not have to worry about them living off of public welfare – I already pointed out that they are self-sufficient and resourceful. In short order, they would find their place in our society, without the ever-present dangers they currently face in South Africa.
Assuredly, many would choose to remain in Africa, as is their right. But many would “grab such an opportunity with both hands” as one Afrikaner told me.
So let us give careful consideration to this proposal. Not only could we use our immigration policies to strengthen the fabric of our society for a change, but we could offer aid and support to our fellow Men of the West.
Let us invite our Afrikaner brothers to share with us in our struggle to save Western Culture. They have experience, tenacity, and gifts that can help us. It is a win-win proposition.

What Does Trump Know?