My job brings me into contact with lots of young men, ages 18-25. I have been doing this long enough that some of my earliest contacts from that group are entering their mid 30s now. During this timeframe, I have been able to assess their nature and character. Like any generation, there are good ones and bad ones. There are tough ones and weak ones. They come in all shapes and sizes. This is not different than my own generation or the ones before it. However, I have noticed some tendencies that set this younger set of young fellows off from previous generations – there are few manly men.

Now, of course, there are exceptions. There are a few individuals that stand out from the crowd, maintaining traditional manly values and skill sets, but as a whole, most young men are weak. This is the generation that grew up with metrosexuals, hipsters, saggy jeans (and their antithesis, the skinny jeans). They think that growing a carefully trimmed beard (or the other variant – the excessively scraggly bushy beard) exhibits their masculinity. 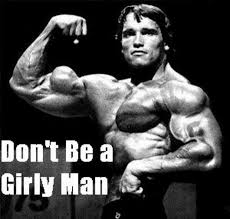 What they are lacking is true strength. They are whiny, temperamental, and have no idea how to do simple, traditional male activities. If I asked one of them to dress a freshly killed deer (or any other meat animal), most would be at a total loss, and would probably become nauseated. They would tremble if forced to hold a knife (much less a firearm). Their idea of protecting their girlfriend would entail begging, threats to call the police, or running. Few of them would bring down the wrath of a warrior.

And that is the very essence that they need. They lack the warrior instinct. Why is this? Honestly, I do not know. I suppose there are many reasons, and some would be obvious (poor parenting, lack of social pressure to be manly, and a break down in the cultural expectations), but others are probably more subconscious and outside of my own realm of knowledge. Ultimately, the point is that something needs to be done to solve this problem.

I certainly do not have all the answers, and look forward to your thoughts in the comments, but here are some things that these young men could start doing to get back on the right path  – the path of a Man of the West.

Fine. That is enough to start with. Do  yourself a favor and learn to be a man. Stop with the sissy, effeminate nonsense. Be a warrior – a Man of the West.