It’s not a threat; it’s an admonition. Depending on who you listen to, the Alt-Right is a small but loud group of homophobic, racist, Nazi, hatemongers that should be completely ignored because we’ll amount to nothing. On a different day, the same people will tell you that we’re dangerous and needed to be shouted down or beat down or jailed along with climate change deniers. Here’s what the Alt-Right actually is. Here at Men of the West we consider ourselves Hard-Right, which is a more highly engaged strain of the Alt-Right.

I believe the cuckservatives/moderates fear the Alt-Right even more than the left does. Why? Because we’re upsetting their comfortable little enclave. They’re used to playing both sides while pretending to be principled. They were never principled. The only thing these “conservatives” ever tried to conserve was their own power structure. The time for pretending is over. It’s going to become increasingly more difficult to stay in the middle because we’re out there knocking down doors and getting stuff done. What really bothers our detractors is that we really and truly do not care what they think. We’re not cowed by their accusations and we’re not apologetic for refusing to play by their rules. They’re baffled; they’re not used to this behavior so they’re throwing everything up against the wall and seeing what sticks. Well, nothing is sticking. We’re getting bigger and stronger. We have no centralized power structure, no leader, no General. This is Fourth Generation Warfare. We don’t need a chain of command or marching orders. We organize spontaneously and we act. 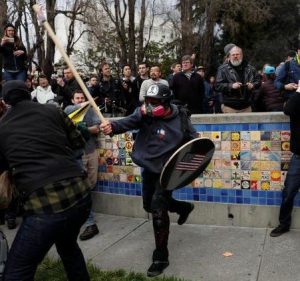 Speaking of sticks, Based Stick Man (Kyle Chapman) is the current poster boy for the Alt-Right. He took action against leftist thugs and became a hero. He was arrested and then they dropped the charges. Why? The charges didn’t make sense in the first place, but that never stopped a prosecutor. They just didn’t want to make a martyr out of him. If they prosecuted him, they would have made a thousand more. What they don’t realize is that they probably already have; it just won’t be as obvious.
Trump is not, strictly speaking, Alt-Right. We are emboldened by him, but he is not critical to our long term future. Obama is still trying to control Washington, but the left now has to work twice as hard in order to not lose power more quickly so I’m not sure what Obama thinks he is trying to control. And by the time Trump has served his two terms, the Presidency will be irrelevant to our dominance. By that time, politicians of all stripes will be bowing and scraping for the approval of the Alt-Right, even as they remain enemies of it.
Many of you have looked at the Alt-Right and realized that it’s not what they’ve been saying it is, but you’re still reluctant to go all in. At some point, you’re going to have to pick a side. Everything is coming down to identity politics and base tribalism. You can’t stay neutral. Alt-Right or die.

Man of the West: Nathan Hale