Roseanne Barr got fired by ABC because she tweeted badspeech. It’s OK to insult someone, as long as you do it in a liberal approved manner. 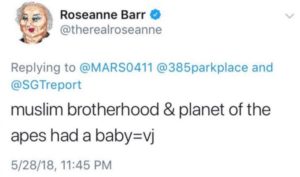 Rosanne said something that could be construed as racist:”Muslim Brotherhood and Planet of the Apes had a baby=VJ”. This ye shall not do. She was referring to Valerie Jarret, an Obama administration official. In a move that costs them millions, ABC fired her and cancelled the show. This is the biggest show on television right now.
First, let me get my groveling virtue signalling out of the way. I condemn what she said. It’s terrible. I also think the punishment should fit the crime. I propose the death penalty. A normal well adjusted adult might take such a terrible insult in stride, shake her head, and go on with her day. I imagine this is what Jarret did. Look at Dana Loesch. She gets insulted horribly because she’s pro-gun. She doesn’t let it affect her. That’s what adults do. We know that those on the left lack this kind of fortitude. Maybe Jarret isn’t capable of shaking off this despicable tweet in five minutes. Maybe it took her an hour, or an entire day. Just to be sure, we should boil Roseanne in oil before we crucify her.
ESPN hired Keith Olbermann who regularly spews hatred for the president on Twitter. ABC doesn’t care about insulting people, if it’s the right people. Samantha Bee called Ivanka Trump the C-word on her show. Now she’s apologized, but she still has a show. There’s speculation that Roseanne got fired because ABC executives just wanted to be rid of her because she is a Trump supporter.  That makes as much sense as anything else. Joy Behar says anti Christian stuff all the time.
Starbucks closed for a day to tell its employees that they are a bunch of intolerant racists. This was of course because Starbucks employees followed Starbucks policy and booted a couple of people who just happened to be black for not buying anything. In a classic over-reaction Starbucks ordered everyone to sensitivity training and now allows anybody to just hang out in the store. 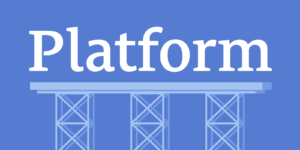 There seems to be a pattern here with large corporations run by leftists. They will immediately throw their employees under the bus if anybody does anything that might offend certain classes of people. Those on the right are fair game.
As Men of the West, we are just observers here. I doubt anybody will even remember this in two months. There will be new bad thinkers to destroy. We note the decline of civility but it isn’t new. We were here when they called George W. Bush “Chimpy McHilterburton”. We see them calling Trump an orangutan.
The left wants to control everything, right down to what you are allowed to say. We on the hard right will say whatever we want. We will not be controlled. We must build our own platforms, because the left has taken over most of the existing ones,
We must also let our actions be governed by sense. Let’s be civil with each other. When attacked, hit back hard. We start nothing and finish everything. We must not be governed by the fleeting outrage of a mob of morons on Twitter.

Stand Fast, Men of the West

The Story of the Malakand Field Force (Part 18)