A group of Yale Graduate Students are going on a hunger strike. They are protesting for more union benefits. They are only getting free tuition (about $40K per year), a $30K stipend, plus free health care, and they just cannot possibly survive on that. So a hunger strike it must be. Except for when they eat. Yes, you read that right. These folks are going on a HUNGER STRIKE (which, by definition means no eating at all), but will actually consume food when hungry.
Are you kidding me? What does this even mean? The whole thing is nonsensical. There is no substance at all to their words or actions. They are using a term: “Hunger Strike,” but removing any meaning from the term.
If you want to know how a hunger strike works, read up on Bobby Sands. Now there was a fellow who knew how to conduct a hunger strike.
This whole thing is simply indicative of how the left manipulates and mutilates language. 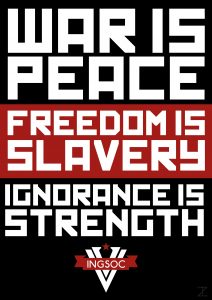 Do you disagree with their particular pet agenda? Then you are a racist. Or a fascist. Or a homophobe. Whatever term they think will elicit the strongest emotional response to force you to change your behavior.
Oh, you thought Obama was a bad president? It is only because you are a racist. It has nothing to do with the fact that his actions were antithetical to anything that would be good and proper. It has nothing to do with his political positions and policies. Any anti-Obama sentiment must be based on race.
So we see “racism” lose its meaning.
You don’t want government controlling every aspect of your life? Then you must be a fascist. Because fascists are bad and you are bad. This sort of name-calling simply shows that the Left either has no idea what Fascism means, and they are simply throwing words around willy nilly.
You don’t want to be forced to accept blatant homosexuality? Then you are a homophobe.
And so it goes. These people are not only delusional, they have no grasp of a junior high level of communication. They misuse words at will, making their statements devoid of any real meaning. It is Orwellian Newspeak writ large.
Really, Leftists have no concept of reality. Their entire world view is based upon emotion. They are concerned with how they feel. Just see how many of their statements begin with “Well, I feel that…” It is tied 100% to emotional response. It has no root in reality or fact.
The Yale “Hunger” strike is just the latest example. It is an emotional ploy, based upon the fact that the Left has nothing of substance to stand upon. Just as Jesus spoke of those who build their houses upon the sand, when the storm comes, the Left’s house will be swept away, for it has no foundation. Their language demonstrates this fact.