A bunch of dirty commies do the right thing for the wrong reason:

A Marxist student group at Swarthmore College disbanded itself earlier this year after realizing that its members were too rich and too white to be real commies.
According to screenshots confidentially provided to Campus Reform by an individual with access to the group’s private Facebook page, the demise of the Swarthmore Anti-Capitalist Collective (SACC) came in the wake of a farewell letter from a member who had decided the group could never be an effective proponent of “unproblematized anticapitalist politics” due to its “history of abuse, racism, and even classism.” 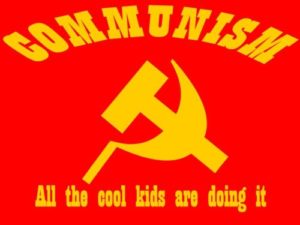 The pattern is obvious once you look at it.  To pick one obvious example, who were the original feminists? Elizabeth Cady Stanton was the daughter of a congressman, as was Margaret Fuller. Susan B. Anthony’s father managed a large cotton mill and when the family lost everything in the Panic of 1837, a wealthy uncle bought all of their belongings and restored them. These were not young wives with a boatload of kids to raise. They were not immigrants working long hours in a dirty factory.  They were the bored daughters of the upper crust; i.e. superfluous people looking for meaning through social reform.*
That pattern continues today.  Why is it that the people who complain the most about “privilege” are the most privileged?  It is simultaneously maddening and hilarious to watch Yale students stage a symbolic hunger strike**.  It is unsurprising when we learn that the main figure in the Mizzou protests of a few years ago is the son of a railroad executive and lives in an $8m house.  These people are not looking for justice, they are looking for meaning. They are dissatisfied and they are bored, and so they would reorganize the whole world by force. Idle hands truly are the devil’s workshop.
So how do we keep our own sons from donning nose rings and Antifa shirts?  Give them work and give them meaning.
The meaning ought to be obvious. As Christians, we are to raise our sons in the faith.  We are to give them an understanding of our world and their place in it. They ought to understand the frustrations of the curse as much as the promise of redemption.
Much of dissatisfaction with life arises because people expect the world, or at least their neighbors, to be perfectible. If only we created the correct incentives, if only we created communes, if only we eliminated private property. Such thought too often results in piles of skulls. We live in a fallen world, and our sons ought to know why. But they must also have hope: the King is returning to set things right.
But work is just as important. Work doesn’t just fill time. It builds skills. It builds confidence. It gives a young man a sense of accomplishment. It also provides a hands-on lesson in where money comes from as well as opportunities to do good with it. Steady, meaningful work goes a long way into making a boy a man.
Our sons are going to face the temptation to join some of their peers in hating the rich, hating white people, hating capitalism, hating Christ, hating themselves. They are going to have friends who fall into that angry pit. They are going to have professors that beckon them to climb in.
It’s our job to steel them against that temptation by teaching them something better.
* Modern feminists combine that superfluity with daddy issues. But that is a post for another day.
** A symbolic hunger strike is one where you don’t eat while you’re at the strike, but when you get hungry, you go get some food. Seriously.

From the Peanut Gallery