Britain has once more, in yet another manner, demonstrated its predisposition for its own suicide.  In forcing the death of Alfie Evans against his parents’ wishes, the power structure that controls Britain has revealed once again that it simply refuses to choose life for its people–even when they don’t want to die.  Britain’s wicked legal system clearly violated the natural rights of the Evans family, expressing a perfectly loveless morality that secular powers strove to achieve for decades.  As a bonus for evil, not only was the British National Health Service eager to deal in death against the wishes of innocent Brits, but the servants of the state even had the added pleasure of satiating the bloodlust of Satan himself.
This weekend, Leftists have earned themselves comfortable room to grow smug grins across their vile, glib faces.  The vacuous lives of these self-righteous, hen-pecking, know-what’s-good-for-you dirtbags is filled with malevolent accomplishment, and they laugh with one another as the enraged normal people seethe with indignation at their utilitarian institutions.
I work in medical.  I see it raw.  For years, I did trauma rooms on Friday and Saturday nights.  Bloody, horrible places, filled with insanity, drama, gore, and death.  Amid the handcuffed prison injuries, drunken sloppy car wreck women, drunk ATV rollovers, shootings and stabbings, tweaked out homeless cases, or morbidly obese “bean bag people” with upset stomachs–amid all that, I’ve seen children.  You never get over it.  It’s never easy.  You see two-year olds who have their abdomens run over by the tire of a car.  You have babies brought in because they’re suspected of being physically abused, and suddenly you find their leg is ripped from its socket, or the ribs are broken.  You have sweet 5 and 6-year olds sitting in one room waiting to be reunited with their mommy after the car wreck–but they’re about to be carted off to child services, because Mommy was on meth or pot during that car wreck, and those precious kids have a possible rape future in foster care waiting for them.  And God help me, even toddler rape cases exist. 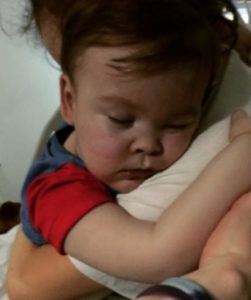 Every time children come through the emergency room doors, staff feels like they’re about to lose their shit.  With every abuse that comes into an exam room, it never fails that two or more will say “Let me take that baby home.  I’ll treat them right.”  Any time a child comes in, they are more often than not a victim of someone else.  It is never easy.  I certainly don’t like such circumstances, but you compartmentalize your emotions, and you do the job.
Yet the hospital children and their medical cases that I described above are a result from neglect or from accidents.  The incidents that bring them to the hospital happen at home among their families or communities.  Not everyone is raised in a crime-free cul-de-sac, after all.  However, the Alfie Evans case is several levels more unfortunate, sad, infuriating, and evil.  In his case, his parents loved him and wanted him to live.  It was the institution itself that wanted him to die.  If Britain had a singular mind, it chose death for that little boy, even if hospitals in Italy were ready to take him out of the facility.  The boy didn’t have to meet death, but the NHS planned an execution that had to be carried out.  Alfie Evans wasn’t being neglected or cast aside by his parents.  He wasn’t accidentally injured because someone wasn’t paying attention.  His parents had the full intention of keeping him alive, and they fought legal battles to do so.
One can assume that this kind of cold-hearted, institutional death sentence is a natural result of Britain’s Freemasonic, materialist path from God.  Keeping that latter point in mind, it makes perfect sense that the NHS would snuff out the little boy, like a gaggle of bloodthirsty auditors trying to clean up their bookkeeping by erasing any messy arithmetic from the margins.  He had to go.  As one involved worker said in an undercover video: “I can’t talk about it, you know what I mean?  I’ve got kids to feed myself. So…”  Alfie Evans is simply inconvenient for everyone.  He was a factor that had to be deleted.
So when things are this horrible, and you can’t depend on your community or Caesar, who can you turn to for support and help?  How about the Catholic Church?  Surely the shepherds of men who are trained to recognize the complete man, spiritual and physical, whose job it is to guide the souls of the faithful to Heaven–surely such men, led by the Vicar of Jesus Christ Himself, will be there in some capacity to help and comfort the parents of Alfie Evans in his time of need?
No.  Not even the clergy could do their job right.  In this matter, we see an even higher level of atrocious failure. 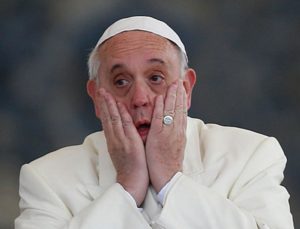 To his credit, Bishop Philip Egan of Portsmouth did manage to pay lip service to the situation, expressing his heartfelt prayers for little Alfie.  But meanwhile, Archbishop Malcolm McMahon of Liverpool and Cardinal Vincent Nichols of Westminster swiftly took away the Italian priest who was working closely with the Evans family.  And in a curious bit of timing last Wednesday, just hours after Pope Francis tasked Bishop Francesco Cavina with mediating Alfie’s transfer to a hospital in Rome, the Catholic Bishops Conference of England and Wales were already congratulating the hospital for a job well done, praising the hospital staff for their “integrity” in this situation–in spite of the fact that the institution has acted as a neo-Pagan death mill, euthanizing a child in the name of socialized medicine.  It’s as if Bishop Cavina was sent on a fool’s errand–as though Pope Francis knew nothing would come of his “rescue effort.”
These same bishops also reject “unfounded” media reports that the chaplaincy failed the Evans family.  They say this, even though, as Lifesite News reports:

an internal memo from the Archdiocese of Liverpool leaked last week revealed that, while the archdiocese was offering support to Alder Hey doctors and hospital staff, they did not meet with the family on the grounds that “they are not Roman Catholic.”

What a hideous charade and a disaster.  It is disgraceful that the British Catholic bishops remain mostly passive in the face of this kind of tyrannical child sacrifice.  By offering mealy-mouthed well-wishes to an oppressed family shows them to be accomplices in this deed, not allies.  There was hardly any resistance at all to the killing of this child.  No protest.  No speaking out.  No opposition.  Instead, what we have are prelates who are snuggling up to the British NHS, breathing in the magnificence of socialism in action, and smiling about “progress” on the inside while frowning on the outside. 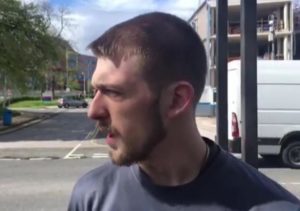 Mr. Tom Evans has offered an olive branch to the hospital staff that killed his son.  Does he realize that his son was euthanized for being of insufficient economic value to the  British system?  I do not know.  As a father, I fear to ponder the horror and agony in Mr. Evans’ mind right now.  Does he admit to himself that he received a large dose of injustice?  Or is he lying to himself to cope with the situation?  What balm could possibly give his heart any kind of reprieve at this moment, I could not say.
Britain wants to cannibalize itself.  While this incident is tragic, it is also the perfect example of where things lie.  If there is any speck of sanity in the country, it will be swiftly overcome by the hideous gargantuan of materialist, expedient, pragmatic, godless utilitarianism.  Helpless souls who fail to become a part of the tax base have no place in such a machine.  It must be run into the ground, until the day comes when the very Britains themselves are outnumbered by the immigrants who’ve come to replace them, and Britain is gone forever.

If By 'Controversial' You Mean 'Stupid'