The American locust migration pattern is not limited to urban White Flight, gentrification, or the fresh injection of immigrants into suburbia–as discussed in the previous article.  This locust migration pattern also exists on a macro scale.  Americans migrate regionally en masse.  The best example is California.  This state, which has boasted an economy on par with an individual nation, was at one time a state consisting of farmers, loggers, and other trades and industries.  California has been a wealthy place.
Over the generations, however, the state of California has been passive and lax in allowing illegal immigrants to invade Californian real estate.  To complicate matters, state leadership has been very liberal, growing soft in their commitment towards the rest of the United States.  Once, California was  state that helped elect Ronald Reagan to the presidency.  But at this point, California government has become so Leftist, that it actually opposes the immigration policies of the Federal Government.  This is to the detriment of California.  Mayors and governors from that state have grown tone deaf to the problems their policies cause.
The result of this neglect by leadership is an invasion force of immigrants, high taxes that are unfriendly to business, rampant homelessness, and a radical populace, just to name a few of the problems.  Naturally, people with a means to escape are doing so in record numbers.  There is a mass exodus out of California. 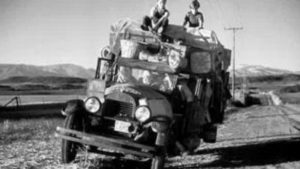 The entire state and its government is viewed as hostile to the interests of law-abiding Americans.  Businesses, entrepreneurs, and entire industries have begun to flee for other states.  California has abdicated to the Left.  It is now a lost cause, and people are jumping ship.  Their new destination: right-wing states.
The states that receive these Californians include Idaho, Colorado, Nevada, Arizona, and even Texas.   These states appear to be a new refuge in this mutant “grapes of wrath” saga.  That said, however, there is nothing to stop the new migrants from California from voting Democrat, thus changing the politics and culture of their new state.  Already, there is much discussion about Texas becoming a blue Democrat state in the near future.  When those days come to pass, will besieged right wing Texans then migrate up here to Oklahoma?
Host states who recieve these migrants are taking no precautions against this invasion of Californian outsiders.  For example, Colorado is now famed for its up-and-coming marijuana culture.  Before, the state was well known for the natural beauty of its mountains.  Idaho, likewise, has been the recipient of untold numbers of illegal immigrants who, streaming up through California, trounce all over American customs, ignoring even the native English language.


California’s problems are hemorrhaging into the surrounding states.  Hardly anything is being done in California to stem the tide of vacating people.  Occasionally there are movements of voters who call for a splitting up of the state.   Such initiatives have yet to be successful.  As for the never-ending, deleterious problems of California, there is no moving forward.  No healing, no restoration, no backtracking to any point of sanity.  Just a steady march forward into ruination.
In this situation, the American masses behave like locusts.  They move from one pasture to another until the land is ruined, and then they move on to the next region.  Just as locusts are viewed as pests, these groups of people are viewed as an impersonal collective.  People stare westward in horror at the thing that is California, and they remark, “They’re all insane over there.”  Just as Jefferson viewed the canaille as sores on a human body, so too is the current view of the American populace.  We pride ourselves on our individualism, but actually, people are generalized most of the time.   We as a population are a statistic, not a people.  We are eaters running out of space.

What If You're Wrong?