The original artist of the Wall Street bull is angry. It seems that another artist has vandalized his work by placing another work in front of it. The statue changes the meaning of his art, from a symbol of prosperity and strength to a villain. Leftists don’t care what they destroy to achieve their aims. 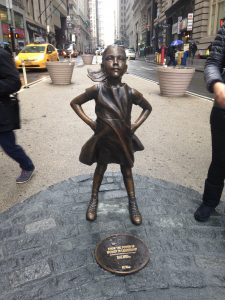 That aside, when you think about it, it is a huge “own goal” for the feminists. Let’s muse a bit on the symbols. You have a petulant little girl, which is a perfect symbol for feminism. She’s defiant, proud of herself for challenging that bull. But she doesn’t understand the danger she’s in. She’s about to die, horribly, and she doesn’t even know it.
Bulls are very large, and powerful animals. They don’t just roam around the streets. They are contained, in a pen, surrounded by a fence. The farmer does this to protect his investment, but also to protect himself and others. A bull can hurt you badly without meaning to. It’s even worse when they mean to. The fence isn’t present in the scene in New York. Feminists don’t recognize the protection provided by the fence. The fence is Western Civilization, which feminists think hold women down, but it actually protects them. The little girl has climbed over the fence that was meant to protect her to challenge the bull.
The bull, in this case, represents masculinity to the feminists. Something they also don’t understand. Western Civilization, the fence, restrains masculinity. It keeps it from running amok. It puts all that strength and aggression to work, to build safe places for little girls to grow up. But the fence is badly in need of repair. There are other ways for masculinity to manifest that are not good for the little girl. The goal of feminism is a secular egalitarian society. Like socialism, this is an idea that sounds good in theory but won’t work in practice. Secularists desecrate all humanity. The result is hedonistic lives lived in pursuit of self satisfaction and materialism instead of raising children. This type of society is weak, and won’t last. The men in such a society either have no incentive to work, and so they won’t, or they will have no moral fortitude, and will victimize women. Feminists are largely silent about Islam, which is diametrically opposed to their ideals. Islam, counts women as second class citizens. Islam would put the little girl into a burqa as little more than a slave, and mutilate her daughters. But if Western men go away, something will fill that power vacuum, and Islam is eager to rule to whole world.
There is a little girl that has climbed over the fence that provides for her safety. She is defiant in the face of forces she doesn’t understand. There’s a bull that is about to stomp that little girl into the dust without a thought of her cause ever entering its mind. It’s a perfect metaphor for feminism.
The result of feminism is the burqa or the brothel.
What do you expect, though from idiots like this: