The next time some idiot says that, you need to slap him. The moron that came up with that sure as hell never heard of John Henry or Casey Jones, either one. And you can bet your butt he didn’t know any miners. 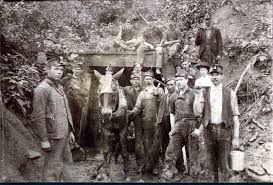 Hard work kills.
How much?
In the private sector 4,054 died in 2004 in work related incidents. Over 400 were in mines. Over 1,700 were in some sort of manufacturing.
Contrast this with government workers. Only 514 of them died because of something that happened at work. Unless you count the 20,000 that died every year of sheer bloated laziness. Hey, the subconscious instinct to breathe is only so strong. The laziness of a government employee truly knows no bounds. I suppose that’s more of a condition than an injury. Oh, well….
Anyway… Hard work kills lots of folks. The trouble is, doin’ nothin’ kills just as many.  And doin’ nothin’ ain’t livin’.

"Of Rights and the Nature and Necessity of Laws"