Part One
Part Two
Last year, I started this series, before being distracted by other concerns. That does not mean the book, nor an analysis of it is not important, but simply that we all have life going on, and I had other things to do, and these analytical articles take me a bit longer than my more

extemporaneous posts, so I put it on the backburner. Of course, our buddy Hoosier Hillbilly admonished me in person last summer for taking so long to continue, and so I feel a bit sheepish that it took me another 10 months after the cajoling to actually get back on it, but here it is. For some background on Weaver, go check out Part One, and follow the link to his Infogalactic article. I would encourage you to go ahead and read both of the first two installments here, since it has been over a year since they were posted, and his chapters (upon which my analysis is based) tend to build upon one another.
Without further ado, here is Part Three, where Weaver moves from the conclusion of chapter two:

Our task is much  like finding the relationship between faith and reason for an age that does not know the meaning of faith.

Shockingly, this book was first published in 1948, yet it speaks to our day even more than his own. He prophetically noted that in his own day, the distinctions that which create society were being obliterated. How much more are we inundated with that very occurrence? He argues that society only makes sense if it has a formal structure, and therefore has an actual hierarchy. This is proclaimed as a “metaphysical truth.”
Does man really want to live in a true society, or regress to an animal-like state? To find true value and who is fit to serve as an authority is hard to determine when those who seek for truth have been “taught a perversion which makes their chance of obtaining [this knowledge] less every day.”  For us to be raised above the status of the animals, two things are needed: knowledge and virtue.
The virtuous man has, throughout history, demonstrated the capacity and proven ability to be in authority. Likewise, those authority figures must be knowledgeable, as administrating rule require the know-how to utilize systems and to plan for the future.  So a society led by knowing, good men has direction. Now, the fact that appropriate authority exists implies that not everyone is totally equal in all regards. In other words, hierarchy exists.
Weaver argues that, while social disintegration began in the 14th Century, it was when “nature philosophy” became en vouge during the 19th Century that things really went down hill.  This is because knowledge and virtue require an understanding of transcendence, which has been lost in our culture.

…traditional society was organized around king and priest, soldier and poet, peasant and artisan. Now distinctions of vocation fade out, and the new organizations…is to be around capacities to consume…Underlying the shift is the theory….[that] if we attach more significance to feeling than to thinking, we shall…attach more to wanting than to deserving…This is the grand solution of socialism…Thus the final degredation of Baconian philosophy is that knowledge becomes power in the service of appetite.

Weaver calls this shift “subversive activity,” designed to invert the natural order of things, which had been proven throughout history to be useful and proper. So now matter is viewed as superior to spirit, and quantity supercedes quality.  He quotes Milton to make his point that heirarchy is not only not a bad thing, but absolutely necessary: “orders and degrees jar not with liberty, but well consist.” He even refers to the biblical injunction (1 Cor 12: 6), where St. Paul speaks of “diversities of operations,” going on to say:

But now hath God set the members every one of them in the body, as it hath pleased him. And if they were all one member, where were the body?

Weaver follows this with De Tocqueville’s observation that “comfort becomes a goal when distinctions of rank are abolished and privileges destroyed.”  The result is that those who would restore the proper societal order should consider as enemies all who would try to abolish the sacred and secular distinctions of hierarchy.
Weaver then considers various focal points through which these subverters attempt to accomplish their evil program, and then compares them with reality.
Most insidious is the concept of egalitarianism.  What makes it so pervasive, and harmful, is that it always presents itself as a reproach to 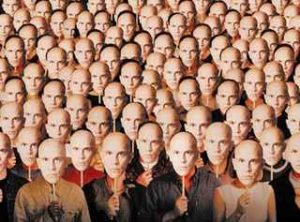 injustice, seeking to set things aright, but is actually, in every case, the exact opposite. Rather, the “comity of people” requires fraternity, not equality.  The ancient relationship inherent in brotherhood carries a sense of obligation to one another, which is lacking in equality. Fraternity includes respect and protection, familial status, and hierarchy. By contrast, egalitarianism is a disorganizing influence, a step toward anarchy. In nature – in reality – equality does not exist. While we might push for equal treatment under the law, when comparing individuals, equality never exists.
Weaver continues to focus on the importance of fraternity and the benefits it provides. “The frame of duty which fraternnity erects is itself the source of ideal conduct.” Without it, people do not know how to relate to one another, and leaders have nowhere to lead, hence leaders do not lead and followers fail to follow.
Fraternity builds relationships, allowing people to know who they are and where they belong in society. Egalitarianism leads to frustration and resentment, which he points out “may well prove the dynamite which will finally wreck Western society.” To lose our hierarchy is to lose soceity.
Rather than freedom and true democracy, forced equality provides for tyranny and destruction, and can only end in despotism. To argue that equality allows each person to have the opportunity to reach his (or her) highest potential is based upon a fantasy, as only a hierarchical system can produce such an outcome.
While some might argue that egalitarianism is the quickest way for one to determine his worth, and to become a true individual, the reality is that such a system forces conformity amongst its members. None can deviate from the “accepted norms” of the society. There is little true opportunity for advancement. To highlight the fallacy of such a world view, Weaver posits a case where society demonstrates that we inherently know the system fails to work. If we truly believed that all are equal in all respects, why not choose legislators and presidents by lot, rather than elections?
Looking about at the American Founding Fathers, Weaver notes that they approached a democratic form of government with some trepidation. They knew that simple majority rule would not work, and so implemented a republican form instead. He points out that there is a reason the liberals (to use modern terms) so abhor the U.S. Constitution, as it stands in the way of their desire for an egalitarian society. The founders knew that hierarchy was necessary.
So democracy (or any stable society) can only exist within an aristrocracy of some sort. He argues that the growth of materialism stands as the major obstacle in our culture. We no longer care about the spiritual and eternal, but only on our immediate passions. That is no way to grow as a person, and certainly no way to lead a people. To have true knowledge and virtue, and hence be suitable for authority, we must have eternity in our minds.
We can build schools and throw money at them willy-nilly, but without a proper mental and spiritual orientation toward objective and eternal truths, those institutions will do nothing of lasting value, as they will not teach useful knowledge, nor produce good men. We must rather reestablish our focus on metaphysical truth in order to develop good, intelligent, and knowledgeable leaders to guide us back to a proper societal structure, and that organization will be built upon a hierarchy, not egalitarianism. 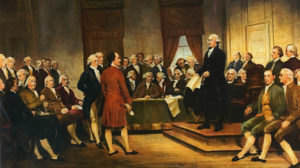 Weaver hit it out of the park in this chapter. Interestingly, in the same year that Orwell published 1984, and introduced us to “Big Brother,” Weaver addressed the root of the societal problems associated with the false god of egalitarianism. None of us are equal. Some are faster, stronger, smarter, better looking, more connected, etc. We have addressed that elsewhere on these pages, and it is still true (I linked it above).
Not only that, but due to the falsity of equality, hierarchy is required. We need those intelligent enough to learn from history and plan for the future to guide society. Not only is knowledge important, however, but these leaders must be virtuous men. We do not want intelligent despots, but smart, godly men to guide us.  That is one reason we Men of the West encourage you to “Shut Up and Go to Church.”
The big question for our day, as we have been almost overrun with this false view of society, both in our schools, our communities, and our government, is what to do about it. Do we try to reform from within the system? Do we just burn it all down? That is a good discussion to have, and my own observations, sadly, lead me to think that a conflagration is coming, even if we would prefer otherwise.
I am not a prophet. I don’t know exactly what will happen, nor when, but I do know that an unstable society cannot last, so what we have now is on the clock. It will eventually, and I would bet fairly soon, fall under its own weight. Whether we have a role in that fall, or just observe it happening, we must be prepared to step in with good, knowledgeable men, to take up the mantle of leadership that will the inevitable vaccuum that appears.

Some Recent Research on Gen X