The 2018 Christmas season was wild. What with all the insanity and amoral nonsense goin’ on, the times really call for a good, solid, annual viewing of It’s A Wonderful Life.  Not everyone has the patience to settle for a black and white film from the 40s. But many do. And why do they do this? What is it that drives so many people to endure a tale told with less-than-stellar technology? We could call it “nostalgia,” but that is not enough.
Trapped as we are, here in this “Roman wilderness of pain,” many folks seek for some sort of outlet of sanity. We are all trapped in a Babylonian street party we never wanted to attend. We want something clean, something wholesome. But what is left for us? What is there? We hold in our hearts a longing to be in a time or place we can never get to. We are afflicted with a sort of homesickness. The Welsh have a word for this: hiraeth. Hiraeth is the longing of a person who feels like a foreigner in their own city. It is the yearning to walk alongside Arthur and Merlin, or the desire to sit beside Bilbo and Gandalf while smoking Longbottom Leaf. We’re trapped on the Planet of the Apes; it’s a madhouse, and we pine for another world.
For all these reasons and more, old black and white movies from the early days of Hollywood have been a refuge. Sanctuary is on a silver screen in movies made before the subversion of the Hays Code. The Bells of St. Marys and Sullivan’s Travels hold the power to both delight and bring one to tears. But why tears? How does something created several generations ago have such a strong hold on us, even today? What do these films do to lure us in and cause us to emotionally invest in them in such a way? And specifically, what is it about It’s A Wonderful Life that brings a tear or two out of us?

Let’s start with a brief synopsis. Angels in the heavens discuss the fate of George Bailey, who is at the end of his rope, and he’s considering suicide. His guardian angel will intervene in his life in order to help him, but first the angels explore George’s life, starting from the time he was a 12-year old boy until the time of his crisis. George’s story begins with his rescue of his brother from drowning in an icy pond; as a result, George lost the hearing in his left ear. And then, throughout George’s life, he sacrificed many opportunities for the good of his own family and community. For example, instead of going on a world tour and then attending college, he stays in his hometown to sort out the local savings and loan that his suddenly-deceased father used to manage. 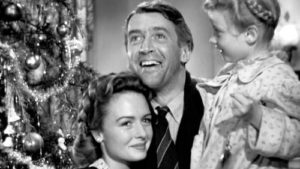 In another example of selflessness, the recently-married George Bailey and his wife, Mary, are about to leave Bedford Falls for their honeymoon. But on their way out of town, they witness a bank run. People lost faith in George’s savings and loan. So, George decides to sacrifice his honeymoon, instead spending his two-thousand dollars of honeymoon money to keep the savings and loan solvent. This savings and loan is a keystone for the Bedford Falls community, as it allows for honest commerce among the townspeople, who would otherwise be ripped off by Bailey’s competitor, the greedy Henry F. Potter. Fortunately, George is willing to take up the mantle and preserve Bedford Falls from transforming into a dingy shadow of itself.
Yet, toward the end of the movie, we witness a scene in which Uncle Billy misplaces $8,000 that should be going to Potter’s bank. Potter finds it, but tells no one. When George finds that the money is lost, he loses his mind. He berates his uncle, tears his own house up, and gives his wife and kids a hard time. After apologizing, he leaves his home, drives to the river, and contemplates throwing himself into the icy water.
At that point in the movie, his guardian angel finally makes an entrance, showing George Bailey what Bedford Falls would be like had he never been born. In this alternate universe, George learns that his mother is an embittered old woman in a boarding house, Uncle Billy went insane after the stock market crash, that his brother, Harry, had died as a child because George never rescued him from the freezing pond, and as a consequence, hundreds of soldiers Harry rescued during the war also died.
After seeing all of this, George returns to the bridge where he planned his suicide, begs God for a second chance, and gets it. His life restored, he returns home expecting jail, but instead the community he helped to protect during his life comes to his rescue with the $8,000, and George Bailey learns he’s had a wonderful life this entire time.

The Gripping Thing About It All…

It’s hard to pinpoint which part begins to grab at me first. Is it seeing the innocent kids playing by the pond without any hint of vulgarity or malice? Could it be watching a young naive George miss all the social cues around Violet and Mary as he works in Gower’s Drugstore? To tell you the truth, I think it all starts hitting me once we see George and his family visiting at the dinner table before the high school dance. George and Harry yuck it up with their mom, dad, and their servant, Miss Annie, and I really begin to start investing emotionally in these characters. I see George show up to the high school dance with a pair of pies, and I feel like I’ve found a salt-of-the-earth hometown that doesn’t exist anymore.
What gets me about this movie is the sense of community that they have. These people have social bonds that most of us never had. They’ve been able to depend on one another for social and moral support. Though the town always seems on the edge of disaster, for us “modern people,” Bedford Falls is much more of a stable community of decent people.
The clearest evil in the movie is the greedy banker Henry Potter, who is the face of cold-blooded, big money predation. In fact, what with everything Potter stands for, it could easily be said that Potter is the gatekeeper of the horrible world we live in today. All Bedford Falls has to do in order to become “our world” is to cede control of the local financial power to Potter. At one point, George Bailey’s dad says the following about Potter:

Oh, he’s a sick man. Frustrated and sick. Sick in his mind, sick in his soul, if he has one. Hates everybody that has anything that he can’t have. Hates us mostly, I guess.

How many people does this describe in our modern American society? Are we not sick in our minds and sick in our souls? And yes, a great many people in our society hate everybody that has anything they don’t. And what was it that the Baileys had that Potter didn’t have? They had a stable, loving family and a community of good people.
George Bailey is a hero for his community. Being the heir to his father’s local bank, he is the savior of the town. Like George, we have a country utterly filled with people who are down on their luck. But George, making selfless choices and sacrificing his wants and desires, serves as a glue for his family and his people. We do not have that so much in our day and age. Rare are the people who keep their world together. George is not impressed with his hometown, and he always seeks to leave it. Yet, he devotes his life to saving it. How many of us aspired for bigger and better things, leaving our communities behind to fend for themselves, only to be swallowed up by a wider, more uncaring world?
In the alternate universe that George’s guardian angel revealed, Bedford Falls became Pottersville. It had degraded into a filthy district of dance halls, strip clubs, and a burlesque house. And now, our entire country is a land of Pottersvilles. Not all of America, but a great portion of it.

A Work That Endures

Frank Capra’s film lost $500,000 (a fortune in those days) shortly after being released in theaters. Unimpressed critics of the film thought it was an immature production, an attempt to portray America as a Norman Rockwell painting, and they called it a “figment of simple Pollyanna platitudes .” The greatest film Capra ever made destroyed his career. And yet? Now? Those who have eyes to see will attest that It’s A Wonderful Life is a powerful monument, and one of the most compelling American films ever made.
The juxtaposition between our modern world and the one in It’s A Wonderful Life couldn’t be clearer. People return to watching that movie year after year, every Christmas, because to do so is an escapist retreat into a more wholesome place. So heartwarming is Frank Capra’s film, that it even causes people to hurt and ache when they watch it. The famous Christmas fantasy is a healing balm for a troubled people. I can personally attest that this old black-and-white movie has the power to keep the attention of even children.
For those feeling like a foreigner in their own city, I would suggest they watch It’s A Wonderful Life at least once, from start to finish. And after viewing it, perhaps these same folks might consider becoming the glue that George Bailey was, and attempt to hold a clumsy community together in the face of dark, consuming forces. And if it doesn’t inspire you to start doing good deeds, then at the least it has the power to grant a reprieve from our current troubles.

Tarnished Brass – A History of the Kansas Fifteenth Volunteer Cavalry, Part I