Our friend, Spacebunny, posted this on Twitter, and I had to shake my head. Really? It makes me wonder if there is some hidden vortex out there that is literally sucking intelligence out of people’s heads. Certainly, it must be a stinging indictment of the retardery produced by Public Schools. Honestly, when I read it, I was gobsmacked.
When I was a kid, back in the 70s and 80s, we did not have electronics. Well, that is not true. We did have such mindbending games as 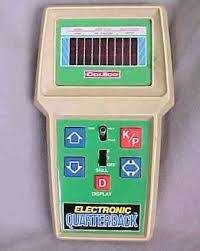 Coleco Football. One little dot moving around a bunch of other dots. It was sorta fun, for a little while, but the call of dirt, trees, and sunshine soon overcame any pull it had on me and my friends.
So we went outside. We climbed in trees and sometimes fell out of them. We threw rocks at each other and built forts. We tossed the football around, pretending to be our heroes:

And Roger Staubach surveys the field…AND DREW PEARSON BREAKS OPEN…he launches the ball….it’s headed out of bounds, NO! PEARSON CAUGHT IT ON HIS FINGERTIPS, KEEPING HIS FEET IN BOUNDS! The crowd goes wild….

When we would come in, we would be covered in dirt, grass, stickers, leaves, and probably lots of other stuff, sometimes including blood and snot. It happened. I have no idea how many last second victories were pulled off out in the backyard, but suffice it to say…the 1970s Dallas Cowboys won way more than two Superbowls. At least in our world.
Once, my dad brought home a new refrigerator. The fridge box served as all kinds of things, until it finally fell apart. It was a fort, a headquarters, a car, a (bad) hiding place for hide-n-seek, and who knows what I am forgetting. We colored on it, threw rocks at it, and once it finally started breaking down, jumped up and down on it.
When we were little, my dad built us a sandbox in the back yard. We had lots of fun in there. Not only did we dig and pile and try to build stuff with the sand, using our little buckets as molds, but that time I caught the back yard on fire, dad used the sand to put the fire out (he could not use water, since I had poured lots of gas in the burn barrel and we had gasoline running around the yard on fire). So it was useful for lots of things.
I mastered the art of tree climbing before I was 5, going 20 and 30 feet into the air. Dad always told me I was going to fall out, but I knew it wouldn’t happen. Until it did. Luckily, besides a bruised ego and some sore muscles and a couple of scratches, I was fine. Still, it built character and was good exercise. 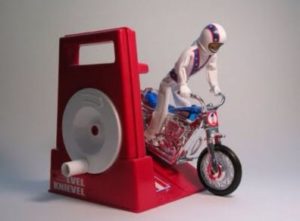 I also had this awesome Evel Knievel toy that I played with until it fell apart. You would get it wound up and release him and he would shoot across the yard. He jumped Snake River Canyon successfully about 9 million times in my yard. Don’t even get me started on what happened on our Big Wheel. Some things should stay family secrets.
But it was not all about toys and boxes. I learned how to use tools outside. I realize it was not good for the plant life, but I bet I nailed a hundred pounds of nails into the trees in our yard. I even got hung up on one of those, way up in a tree, when I was about 5 or 6. Got hung up on a back belt loop. My mom had to climb up and get me down. Built character for her, too. Good times.
I took a saw out one day and cut down about 12 pecan trees at the nearby Methodist Church. They were not very big yet, but were pretty expensive. My dad was incensed,  and called the Methodist pastor, who took it to his Church Council.  Dad expected the worst – that he would be out hundreds of dollars to replace them. In the end, the church told us to forget it and they built a volleyball pit instead. Needless to say, I did not get to use the saw for awhile.
I mentioned forts and rock-throwing. That happened a lot. At least two or three times per week. We often took turns being the Russians, so 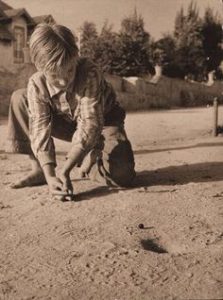 that we had a good enemy to fight. Once, a neighbor kid got a really good shot on me, hitting me right  in the middle of my forehead. Knocked me flat out. He ran and got my dad and then ran home, scared of what dad would do. Of course, you would think he would comfort me and care for my wounds, etc. Nope. He picked me up, carried me over to the neighbor’s house, kicked in their front door, and yelled, “LOOK AT WHAT YOUR BOY DID TO MY SON!” Yeah, more good times.
We would race each other around the house. Over and over, time and again. We dug holes and filled them in (when mom caught us and made us). As we got older, we had to mow the yard, rake leaves, and do other such things.
I am not even talking about what we did at school or other organized activities, where we played games like Red Rover or marbles, skipped rope or see-sawed.
My point is that there are so many great, character-building things for kids to do outside, that it is a travesty that they are addicted to electronics. I am no luddite. I am not saying electronics are evil and should always be rejected, but there should be a balance. You need to be sending your kids outside to play. Kids have been doing that for millennia. It might take a little time to get adjusted to the sunlight, but they will figure it out.
Sure, sticks and stones may break our bones, but they will make us better people for it.

The Story of the Malakand Field Force (Part 8)