Editor’s Note: Jasper Thorsson ponders the meaning and power of stories for a culture.

Why have all of our stories for at least a century, maybe more, been directed towards anti-establishment themes?

My friend Chris led off with this question when he brought a book to my attention. Legacy is a story we’ve all read and seen dozens of times. This plot is normal: A poor outsider redefines a host culture and sees huge success; the outsider is everything noble and good, the conservative native folk are evil obstacles, and the self-interested newcomer feeds and feeds on manipulable locals to become a giant.

Good people are not in charge of the avenues of television, YouTube, or publishing houses. We have very few channels that tolerate us. The window is closing where good stories can be supported or even found as governments and technology companies climb further into bed. Yes, we can cling to the giants of the past, but there is a future to be made as well.

Chris was full of frustration and anger as he became aware of what has been lost to this relentless tide of subversion, uncertain how to fix a problem decades in the making. His is the voice of a whole host of unserved souls seeking a home, a place where they are not the enemy:

We read about Anne Frank instead of some of the history of how the Jewish people found themselves in the same position again and again in countless countries. We read about the woman’s suffrage movement but not about how able-bodied and competent men built a country. We see movies about the lone cowboy lauded as a sort of hero, when if you step back, you realize he’s an anti-social murderer. Few stories about how entire communities settled the West. We hear about the how the whites murdered the poor Indians forcing them on the Trail of Tears or the massacre of the Sioux at Wounded Knee. But we don’t hear about how vicious and murderous were many of the Indians to our own women and children. How absolutely demonic were some of the tortures inflicted upon some settlers. I had to get Foxe’s Book of Martyr’s for those stories. Why did my church never let me know about that book in Sunday School?

The observations above are not groundbreaking by any means, but widely accepted and understood. The heart of the problem is that there is little being done to support storytellers who love what God’s grace has brought to us here in the West in our gilded modern age. You aren’t just buying a book, you’re supporting the writer—and what they stand for.

I’m sick and tired of the rags to riches stories of [outsiders]. I’m sick of hearing about the lone hero a.k.a. Joseph Campbell’s “The Hero’s Journey.” What happened to our stories of great accomplishments within Western Civilization? Every story is about challenging the accepted order of things [not appreciating its accomplishments]. What was wrong with the old order?

I find myself identifying more with Anakin Skywalker than Obi-Wan. “Only a Sith deals in absolutes!” Yeah? Well perhaps Obi-Wan needs to find the real God and follow His absolutes rather than the moral relativism of the Jedi… Amazon had to change their marketing for the show, “The Man in the High Castle” because clean, law-abiding suburbs are actually something to be desired rather than the hell-holes of Baltimore, Chicago, and San Francisco.

Whatever a man believes, he believes because of stories. They are the foundation of our faith: Hindu, pagan, statist, Christian, Western, native, or foreign. The best evidence we have still leaves us in a state of faith, not certainty, so we cling to stories and choose to believe one story over another for meaning, purpose, and to answer the question “How then shall we live?” 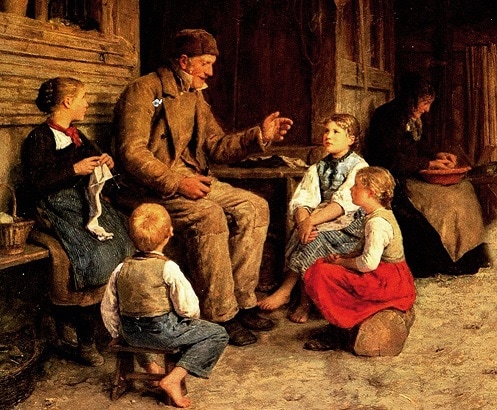 If you feed your children a diet of stories about fruitless, childless adventure-achievement romances and heroes overthrowing evil powers-that-be rather than serving a good and natural order, should you be surprised that they fight you when you exert your authority over them, and link up with partners more interested in fleeting gastrointestinal butterflies and cuddling up to watch Netflix than they are in building a strong home full of happy children and being a part of a community?

Stories are too powerful to be ignored. Parents, community leaders, shepherds who watch your flocks whether they be large or small, I ask you now: What are you doing to support stories that are good?

There is a relentless gravitational pull toward secular and frivolous entertainment — when it isn’t subversive or unashamedly evil in the first place! The arts and schools and institutions so often complained about need to be replaced when they fail. Are you supporting those working to build alternatives? Are you seeking out new fuel to brighten your community’s beacon on your hilltop?

Can’t [we] get back to writing hero stories that inspire our boys to greatness? Just write it straight. Emulate the lives of other great men that went before you.

Sadly, I know of few of them. I want to hear stories about how good men build businesses that last for more than a generation. How those enterprises empowered an entire family to build the Kingdom of God.

What about stories where God used a nondescript believer mightily in some arc of history?

We all love the great storytellers of the past who valued Christendom and delighted in praising good and encouraging the fight against evils— C. S. Lewis with his Chronicles of Narnia and delightful space trilogy, JRR Tolkien with the Hobbit and Lord of the Rings trilogy—but what then?

I had the good fortune to stumble upon Jack Mikkelson, who has decided to make it his mission to follow in these good writers’ footsteps instead of the modern crowd. He is only beginning his writing career, but when I began reading his first book I was immediately struck with how elegantly he had tipped his hat to the old, powerful traditions instead of the modern subversive marketplace.

He is not as skilled, perhaps, but his tale has active and uplifting characters that could have been drawn directly from Lewis’s work, from the simple and small mole-assistant Mr. Humblemine to the towering Dandar the bear. The heart of the quest is as simple as the Hobbit’s accidental engagement and driven by the desire to start a good family and build a future to be proud of.

It was a delightful breath of fresh air. There is no sense of overpowering oppression with darkness polluting the whole land. The whole story is good through and through, and quite episodic — ideal for reading a chapter before bed — and there are ever so many wonderful object lessons to discuss or that you can feel comfortable allowing an impressionable young mind muse on in his or her own time.

The hero, Bovodar, has a legacy from his family he is concerned about, being descended from a great explorer. As he supports a goodly friend, he continues his work as a mapmaker. When they encounter difficulties, they face their troubles squarely and honestly with clever minds and bold action instead of random acts of deus ex machina.

For children, writers like this are wonderful. This story reminds of the importance of solid living instead of monetary ambition or seeking in vain for magical powers to seize control over others. Here is an example:

“…as my grandson matures, he sees the need for a good wife. After his long trials… he turned to Krets Forest and went to look for his bride. But oh! There were no more wives to be had!”
“Ah,” sighed old Tedthun. “Who can find a good wife? They’re worth more than jewels.”

In short, Bovodar and the Bears was like eating a hearty stew instead of a plate of platitudes or sitting down to be preached at. I was particularly struck by another scene which hearkened back to The Last Battle where Bovodar falls into the clutches of two monkeys pretending to be men, tricking the local creatures into worship and service — chilling in its allegorical tact.

We owe our progeny a good upbringing, of course, and we try to do the best we can. There is still a whole generation that right now is flailing against the sleep-inducing, demoralizing, enraging chains that they have been placed in just by being a part of the culture. This last part of my conversation with Chris almost broke my heart as he sighed, resigned:

I know I’m partly getting people to say, “Yes, the sky is blue.” Marry. Have children. Build the Kingdom of God. Protect the weak. Build your own platforms. Begin to take back what was stolen. Don’t capitulate. Call out evil where you see it… Have each other’s backs. Real community needs to be rebuilt.

How am I supposed to answer a young person who justly feels betrayed at having to discover the important things on his own, build up from the ashes when he failed to be born into a community that conserved anything? If we don’t make a change, what we love will be lost.

We need people like Jack Mikkelson. We need him writing instead of working a day job. Of course we can blame him, tell him to do better, wait for him to rescue us and solve our problem. Wait for the media to recognize his talents and delight in his stories.

Or we could do our part and support him, or Christian publishers at the very least. Our surrender to Amazon will have dire consequences soon; the ground is already rumbling, and rebuilding will take a whole community.

Invest.  Support good authors by buying their work, or joining their newsletter to let them know we like what they’re doing. Support the alternatives instead of complaining about the wild gyrations and tainted products from mainstream sources. Build the world you want to live in.

The Voyage and Shipwreck of Saint Paul – a Review

The Ability To Think For Yourself