#mesotoo
Step 1: Conservative runs for office or gets selected for a position, and Democrats are scared of them.
Step 2: Democrats trot out some female Democrat(s) who might have had some sort of contact with the conservative 30 years ago, claiming Conservative sexually assaulted / harassed them.
Step 3: Despite having either no evidence or dubious evidence, very thin story from 30 years ago is taken as absolute truth and demands are made to disqualify conservative candidate.
Step 4: Rinse, Repeat. 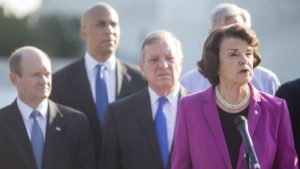 This is completely and utterly ridiculous. Not only because it is so obviously a lie and a predictable bullshit ploy, but because of the long term implications that it has for future politicians. Are we now to expect never being able to run any candidate who never once attempted to feel up a girl as an awkward teen? Are the people we are expecting to represent us, the common folk, in the highest offices of the land really supposed to be groomed from birth to always be the perfect gentlemen/Christian/ equalitarian?
No. Bullshit. Absolute rubbish.
I am a good Christian today because of my mistakes in the past.  Would I ever want someone judging me or setting laws to dictate my life who has never made a mistake? That is if we can call being young and lustful with no real harm done a mistake. Lord, I can imagine the shit show if I ever ran for office. Dozens of women making dubious claims, placing my word against theirs, fabricating assault where there was none and lack of consent where there had been. And that’s just the women I’ve actually had contact with. How many more would just materialize out of the ranks of democratic voters?
This is a deliberate and hypocritical strategy by the left to force conservatives into a corner. The only way to stop it is to follow the God Emperor’s lead and openly tell these people that they are full of shit. Refuse to back down, refuse to apologize. So far Bret Kavanagh is doing just this, but it is up to the rest of us to follow suit.