“What is truth“- Pontius Pilate
Truth is important. When you lose the importance of truth you get some strange things, like men claiming to be women. Or young women claiming to be cats.
Social constructivist theory holds that truth is constructed by social processes. Barf. We do not currently have the technology to turn a man into a woman. In my opinion, that is not a fruitful technological pursuit. Sorry Caitlyn, you’re not a woman, and the truth doesn’t care about your feelings. I will not simply accept that a man can become a woman despite all we have learned in biology and human physiology. What we have today is mental illness elevated to the level of truth. I’m not buying it.
Objective truth is truth that is independent of the observer. To an observer, the earth may appear flat. Objectively, we know it is an oblate spheroid. Imagine, if we followed the consensus theory of truth. 500 years ago, the earth would have been flat, and today, it would be round, without it making any changes in between. Let’s reject the consensus theory, shall we?
The Correspondence Theory of truth states that true statements and beliefs correspond with the actual state of affairs. I believe the Earth is an oblate spheroid. The Earth is an oblate spheroid. That is a true belief. The apple is red. Is it a property of the apple that it is red, or does my eye perceive it as red because certain wavelengths of light are reflected off it that my eye recieves and my cerebral cortex interprets as red? Lets not get carried away.
Truth gets a little more muddled when we are talking about religion. Most of us know things and believe things about religion. I know that the Bible says that Jesus was crucified and rose bodily from the dead. I believe that also. But is it true? It is the most important question a person can ask himself. 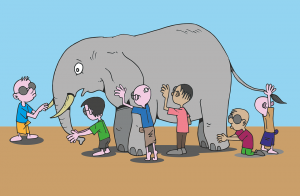 MORAL,
So, oft in theologic wars
The disputants, I ween,
Rail on in utter ignorance
Of what each other mean;
And prate about an Elephant
Not one of them has seen!
-John Godfrey Saxe

The author ends his poem chiding the different theological perspectives for railing on in utter ignorance. None of the blind men really knows what the elephant looks like, yet they are all sure that they know the truth. In the same way, none of the different religions ‘know’ about God, but the author supposes all possess a piece of the puzzle. Therefore we should be more inclusive. What is ignored, is that there is an objective truth, and it is told from the narrator’s perspective who isn’t blind.
It is important for a person to know what he believes, and to know why he believes it.

The Wrath of the Awakened Saxon

The Mandelbrot Set And Narnia

The Mandelbrot Set What struck me was how in C.S. Lewis’s final book for Narnia, there