One of my favorite military history books is called The Last Stand of Fox Company. It’s a story of one company of soldiers during the Korean 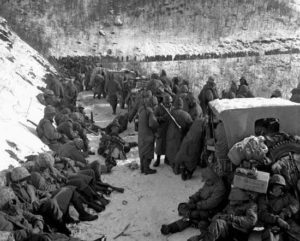 War. They fought in some horrific conditions while greatly outnumbered, and they prevailed. Recently, I watched an American Experience Episode called the The Battle of Chosin. It’s running on Netflix right now. You can also get it on Itunes or Amazon video.
The book tells the story of lonely Fox Company, left behind to keep the road open. The show tells the larger story of the whole battle. This is the military equivalent of Apollo 13. We blundered into 300,000 Chinese soldiers, got completely surrounded, and managed to break out and evacuate, all while fighting in terribly cold winter conditions. The story is told by historians, and by men who were there.
There is a lot of graphic war footage. so you may want to view it to determine if it is appropriate for your children.
Highly recommended.

A Gruesome And Ironic Image