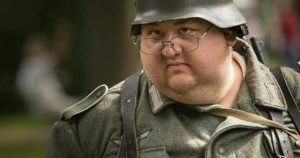 Not only are the alt-Reich not right wing at all, due to their socialism, globalism, and totalitarianism, but they aren’t even Nazis. These low status males are so painfully unaware of what the actual Nazis stood for that it’s fairly embarrassing. Generally they get lost after “fuck them darkies and jooos.”

A few points I would like to bring up that are easy to see on the surface are the nearly universal lack of physical fitness present amongst the alt-retards, and the failure to work for the betterment of their communities.

A quick internet image search will show that the overwhelming majority of these Neo-Nazis, who’ve been equated in all major media as being the sole representatives of the Alt-Right, instead of under the vague umbrella of those disenfranchised with the traitorous Republican party who identify as alternative-right, will reveal that these are largely low status males, much like those in Anti-fa. They are either obese, skinny-fat, or just plain wimpy skinny. These guys don’t even lift, let alone dedicate themselves to the constant physical training that is dictated in the central points of Nazism. I have no doubt that if they did engage in testosterone stimulating physical training, they would very quickly lose their sexually frustrated rage when they finally attract a mate. Without their castrated rage, and the fact they were busy having sex, their interest in fake-nazism would quickly wane.

And these guys do nothing for their community. In fact, their leaders are nothing more than fame whores looking to ride the tide to a quick buck. There is no selfless service to help their neighbors. 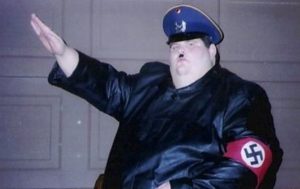 There is no volunteering for their community. Where were they when Hurricane Harvey wrecked Houston? They were sitting on their asses calling people “Joooo lovers” over the internet. How dickless. The Men of The West were there, working sleepless days, collecting goods and donations, taking in people in need.

No, these sad sacks of shit are not right wing at all. But neither are they even Nazi enough to merit half-assed. They are live action role players, angry that they haven’t achieved career success or succeeded in producing the white children that are eternally important to their racial Utopia. They are nothing but trolls who got carried away with tormenting SJW crybabies, and now they can’t tell the difference between the LARP and real life. Low Energy.