As we have often argued on this site, we really do hope and pray for peace. Yet, as we have also pointed out, it does not appear that peace is what awaits us, at least in the short term. Rather, tough times approach, and unless something changes, it could be a time of violence and bloodshed. Again, that is not what we want, but it would be idiotic to pretend like it cannot happen.

I have long prayed that if such times must come, that they would come during my generation, so that my children could be spared that pain, and be able to reap the benefits. I would much rather pay that price and keep them safe from it.

Unfortunately, my generation is entering middle age. Oh, we are still quite capable of inflicting damage and will be able to do so for some time, but like all generations, that period is limited. We all get old. Now, I do believe that if such dangerous times erupt around us, it will be sooner, rather than later, but already I have sons old enough to be involved. At present, we live in an overlap era, where fathers and sons are both of an age to be engaged in action. 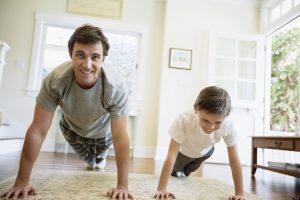 Now, I realize that at ANY time, there are fathers and sons that can fit that bill, but for the time being, it is me and my sons that find ourselves in this predicament, which really drives this home to me. This is why we must be vigilant of our surroundings, able to protect and defend our families, as well as defeat the enemy. But this is not a one-off event. It will take some time. So we must be training our sons to take over.

I don’t like it. I wish my sons could live a luxurious life, but God has seen fit to give them something else, it seems. Most likely, as my generation passes out of effective fighting age, we will transition into leadership roles, while our sons step up to the fight.

In earlier articles, we have addressed this topic, at least obliquely. Back in January 2017, I wrote about raising Manly Men. That advice still stands. However, we need to go even further. We need to teach our sons about fighting, strategy, tactics, and how to win the war.

If you are not knowledgeable about such things, then you need to get on it right now. Learn about 4G warfare. If you do not understand that, you will lose. Read Bill Lind’s book on it. Once you ingest those principles, pass them along to your sons.

Then you should read about battle. Read the works by great leaders. Read about strategies that worked, and those that did not work. Figure out why one worked and the other did not. It is important to understand strategy, but also to know tactics. Lind’s book will help with that.

Can you fight? I don’t mean that slap happy crap that people do when they are mad. I am talking about being able to defend yourself and take down your enemy. Can you do that? We have had a few posts by honest-to-God deadly men on this topic. Read them here and here.  If you do not know how to fight, then you need to learn. You might engage in Martial Arts, Boxing, MMA, or some other form of self-defense, but you and your sons need to know how to do this.

Knives. Can you use them? I am not talking about some esoteric nonsense like throwing blades at balloons. I am talking about having  competency in wielding a knife, if the situation dictates. If not, learn. You might pick some of this up in your martial arts training. Or you might find someone to give you instruction. Here is a video of a guy I know who offers such teaching  (and more):

You might be able to find someone in your area.

How about firearms? Can you use them? Maybe you will never be a sniper, but you need to know how to fire a rifle. You need to be proficient. Having a variety of calibers is not a bad idea, in order to use the proper tool for the job. At my house, we have several different rifles, from a .22 up to a .30-06. Different rifles for different purposes.

Pistols? Yes. You need a heavy duty pistol, as well as a concealed carry weapon. I will leave the arguments over caliber for another time, but while my preference is for a .45ACP, a good 9mm in your hand is better than a .45ACP down at the gun store, because you never bought it. Again, at my house, we have quite a few, from .22short, to .380, up to .45ACP.
Shotguns? Absolutely. I actually prefer this for home defense. They are also great for other purposes, including bird hunting and such.

Look, like it or not, our boys are going to need to be ready. Even if, by some miracle we are able to miss out on the violence I fear is coming (or if we complete the task while we still can, before our sons are drawn into it), at least they will be ready to defend their culture.

If your boys have been spending their lives sitting on their butts, get them up. Get them moving. I won’t get into eating properly and exercising, but you can search for the Beast Life articles on this site for the latter.

If we do not prepare them, we are failures. Watch this scene from The Patriot. It is one of my favorite scenes in the history of movies. Here, we see a Father, who has already trained his sons, and now puts them to work doing what must be done. We should do no less.

The Way of Holiness