Here at Men of the West, we have discussed truth several times. Here are a few examples:
Truth and Peace by Rabbi B
Mercy and Truth Are Met Together by Anglican
Truth by Theophrastus
Truth or What? By Hugh Glass
Defending Truth Where Decadence Is King by Rabbi B
So you can see that we do take Truth seriously here. When I hear the word “Truth,” the first image to pop into my mind is the scene, from John 18, where Jesus is before Pilate and Jesus claims to have come to “testify to Truth” and that those who are truthful people will listen to him. Of course, Pilate retorted, “What is truth?”
That is a great question. What is truth, and connected to that, what is our relation to that Truth? Jesus referred to those who are “of Truth,” so what does that mean?
Consider this example, where Congresswoman James Brown Maxine Waters riles her crowds up by advocating that anyone who supports President Trump should be ridiculed and persecuted. Seriously, she argues that if Trump folks are seen in public, then a crowd should gather around them and proclaim that the Trump supporters are not welcome, no matter if it is a private business, a gas station, a department story, or wherever. See for yourself:

Can you imagine if someone from the Right had said that about Obama supporters? How would Maxine Waters have responded to that? It would be denounced as hate-speech and racism. Those advocating for the assault on Obama supporters would be castigated.
So why is it ok for her to do this now to Trump supporters? What is the difference? Well, the answer is simple – there is no difference. The problem is not that the situations are different, but that what is real and true does not matter to Maxine Waters. All that matters is politics.
This is why you can watch various politicians- from both parties, mind you- who say one thing when a Democrat sits in the White House and the opposite with a Republican occupies the Oval Office. These critters care nothing for Truth. They care only about politics. They care about de-platforming their opponents. Period.
If the current economic situation had occurred in 2015, under President Obama, the Democrats would be crowing about how well their policies were performing. Since it is actually Trump policies that have lead to our economic boom, they take pot shots and say that the recovery actually began under Obama (a blatant lie).
It was Obama who said that all those manufacturing jobs were gone forever, and the people better just get used to it. He claimed that Trump would need a magic wand to bring them back. Maybe Trump has a fairy godmother, but for whatever reason, the jobs are coming back. Obama was just flat out wrong.
Rather than admit that, and acknowledge that Trump had better policies, Obama and his minions have to claim obvious falsehoods. Why? Because they care nothing about truth. 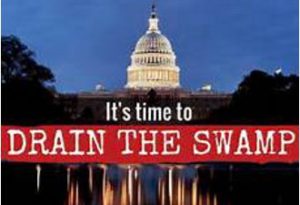 Now, don’t get me wrong, it is not just Democrats that do this. Republicans are just as guilty. They have promised the American people for over 40 years that if we would just elect Republicans, we could get rid of the scourge of Abortion, yet we have  had four Republican presidents since Roe v. Wade went into effect, and yet Abortion still plagues us. We have  had Republican majorities in Congress several times, sometimes with Republican Presidents, and yet nothing has been done. Republicans say one thing when Dems are in charge, but do another when they are.
Consider the atrocious Obamacare debacle. Passed in 2010, the Republicans promised that if we would just put them  in charge, we could get rid of that garbage. While Obama was President, every year, the Republican congress passed anti-Obamacare legislation, knowing Obama would veto it. When Trump was elected, promising to rid us of this mess, and was ready and willing to sign that previously passed legislation, if the Congress would simply pass it again – the Republicans bailed.
So that is the deal? It is a problem for both major parties – they are liars.
This is why Trump’s desire to “Drain the Swamp” resonated with Americans in 2016 and even today. We know that the majority of people in the Federal Government are corrupt to the core. They would not know Truth if it bit them in the backside.
So what to do? Support those candidates who back President Trump’s goals to drain the swamp. Vote out the scoundrels who lie to us.
We Men of the West hold to Truth. We do not make arguments for political points; we adhere to what is right and good. Our congressional representatives should be held to the same standard.