We prayed for peace. We still do. Unfortunately, our enemies refuse to allow for peace. They instigate hatred and violence. When was the last time you heard of anyone on the Hard Right committing an act of offensive violence (as in, not for self defense)? When was the last time that true Americans (those of Western European descent; the Hard Right) rioted in the streets because they were upset about a court ruling or other such thing?
Now, just look at the past few years and consider  how often the Left has rioted or inflicted violence. Baltimore. Ferguson.  Berkeley (more than once). Middlebury College. The list goes on and on.
Sure, the Left portrays the Hard Right as violent fascists, but the reality is that they are projecting their own intentions. The Hard Right has no desire to hurt others. Still, as has been pointed out before, just because we have no use for it, doesn’t mean we can’t do it. And, sadly, it appears it is coming sooner, rather than later.
Again, to be clear, the Hard Right will not instigate violence, but you can be sure that the Hard Right, when attacked, will fight back to the hilt. Once the Left forces this response, the Hard Right will see it through and clean house. You can take that to the bank.
So while we might prefer peace, it appears that we will not have it for a time. If violence is going to come, then it is best to be prepared.
And the Hard Right is getting prepared. “Based Stick Man,” Kyle Chapman has begun organizing a group focused on:

street activism, preparation, defense and confrontation. We will protect and defend our right wing brethren when the police and government fail to do so. This organization is for those that possess the Warrior Spirit. The weak or timid need not apply.

The Left produced Antifa, with their hoodies and masks. They did not consider that the Right would also make plans to counter them. That is their mistake, and another example of their underestimation of their opponents. Tough luck for them. 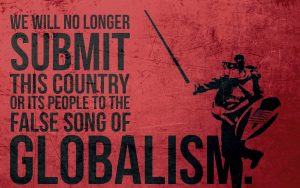 And Chapman is not the only one taking steps to protect the innocent, support Western culture, and oppose the radical Leftist agitators. The Dark Triad Man himself, Ivan Throne, has set up Violent Solutions.  You can read more about it here.  The League of the South, and other groups are gathering in Pikeville, KY, this weekend. Antifa  has promised to disrupt things. The Right is ready.
These are just a few examples to highlight the next Great Awakening. Like the earlier incarnations, a resurgence of Christianity must be at the core. Without it, the Hard Right cannot win. With it, the Hard Right cannot lose. This Awakening will manifest itself in many ways: socially, culturally, politically, spiritually. The battleground is currently on the streets, but it will eventually come to our homes. That is why we must be prepared for these eventualities. Get your children out of public schools, if you have not already done so. Teach them to love God and their fellow man. Train them in self-defense, to include firearms and hand to hand fighting. Raise your sons to be men, and your daughters to be women. These are all foundational issues to the larger cultural war.
With that foundation, the actions on the streets will have roots. It will be more that a single confrontation. It will be a battle in the larger war. One that our side will win.

Be Christ to Your Wife: a Challenge to Married Men