Last year we had a series [Part One; Part Two; Part Three; Part Four; Part Five; Part Six] that discussed the Muslim Question, and argued that Muslims are not of the West and should not be allowed to stay here. They should be sent back to their camels, tents, and sand. Let them worship their false god there. They have no business in the West, not in Europe or America. Last year, we reminded readers that when the West and Islam come into contact, violence ensues, and is only stopped when one side establishes superiority.
Thankfully, in God’s mercy, he has allowed the West to keep Muslims out over the centuries. But in recent decades, historically-ignorant and short-sighted politicians on both sides of the Atlantic have allowed mass migration of Muslims into our lands. The same lands that Charles Martel and Jan Sobieski (and our Founding Fathers) helped to keep Muslim-free. And what is the result?
Just as we pointed out before, violence and mayhem.
These Muslim hordes do not target armies. Read that link. They give explosive toys to children. They are trying to kill babies and women. 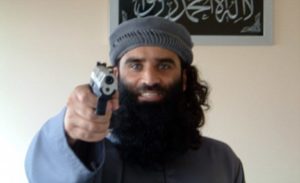 They have no honor, but then again, they never have.
So again, we make the plea – send them away. We do not want them here. And if someone who lives here in the West chooses to join them, regardless of their citizenship, they should be removed from our shores forthwith. They have chosen their side; we must choose ours.
As I argued in Part Four, linked above:

So really, folks. When is enough, enough? When do we let our elected officials know, in no uncertain terms, that we have no desire for Muslims to live in the United States, or anywhere else in the West, and force them to enact policies to rid us of this vermin?
Here is the reality: if the government will not do something to relieve the pressure that is building, then the people will.
Understand me clearly. I am not calling for folks to rise up and kill Muslims. I am simply saying that if Muslims continue to live amongst us, and continue to commit the atrocities, then the time is coming quickly, when the people will not give a tinker’s damn what the government wants. They will not bother to check with the local authorities. They will take the law into their own hands, and it will not be pretty.
There is no doubt that removing Muslims will solve this problem. Just look at this map, which shows Muslim attacks in Europe. Notice the country that is free of dots? Poland. The country who refuses to accept Muslim migrants. As Vox Day has repeatedly stated, Diversity+Proximity=War. Remove them, and the tension is relieved.

What kind of man would invite a known pedophile into his home on a permanent basis? Why would we entrust the care of our children to people we know mean them harm? It would be criminal negligence.
So I am calling for the immediate repatriation of Muslims. They need to go home. That has been a constant theme in my aforementioned articles. If the government will not make this happen, they are forcing the situation to boil over. Muslims will be removed one way or another, whether some folks like it or not. The only question that remains is whether there will be blood running in the streets or not.
The end result is determined. The path to get there is not.
Regardless, enough is enough.

Men of the West have chosen. We stand unabashedly for Christianity, Patriarchy, Community, and Liberty. We have no part with Islam, except to reject it and send it away. We encourage you to do the same.

Reminiscences of the Anglo-Boer War (Part 7)

The Story Of The Declaration Of Independence